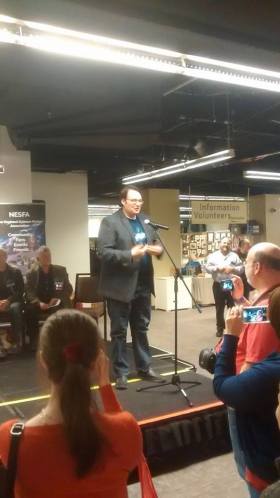 So I achieved a bit of a life goal this past weekend by getting to meet Brandon Sanderson while he was the guest of honor at Boskone – a science fiction and fantasy convention in Boston. It was a highlight of the weekend (he’s very nice in person, in addition to being an incredibly talented writer).

It was a highlight, but it was not the only highlight. And it’s not really what I’m here to write about now.

While I was there, I was able to spend some time with faculty, alumni, and current students of Stonecoast – the MFA program I am attending. It was great to see everyone, and it also gave us the opportunity to catch up and talk about writing (among other things).

One thing that was interesting about the various conversations was being able to discuss perceptions about ourselves as writers as compared to other people. This is something I think about at times. And, as we talked, my classmates voiced similar thoughts.

We talked about the struggle of comparing our own first drafts of stories against other people’s published works. We talked about the feeling that everyone else has an easier time writing than we do. We talked about how challenging it can be to look in from the outside on someone else’s writing career and wonder how we ever hoped we could achieve a similar level of success.

But Boskone was also a reminder that these worries are not necessarily valid.

Part of the excitement of Boskone is that it is attended, in part, by some high profile writers, editors, agents, and artists related to the speculative fiction genre. These are people who define the field of work. These are artists whose work I admire, whose books I read. These are the publishers I aspire to be associated with someday.

And time and again, I was able to hear them describe the same struggles that I find myself facing now.

During a few of his talks, Sanderson described the numerous unpublished novels that he wrote before ever making a sale. He told us about writing a fifth novel, then a sixth novel; about watching them be rejected by publishers, about wondering what he was doing wrong. Other writers talked similarly about the books they have locked away in the dark corners of their basements; books they hope will never see the light of day. Agents and publishers described contract mistakes, career struggles, unfulfilled aspirations. They talked about the work it takes to succeed in this business.

And it made me feel hopeful.

It’s not that I just get some sort of twisted pleasure out of hearing other people’s stories of failure. I felt hopeful because these people that I look up to so much professionally have come out of a place very similar to the one I am in now. They have written terrible things. They have had their attempts rejected. They pressed forward. They found success.

And in the context of a conference like this, they have been welcoming and helpful to writers, such as me, who are early on the journey. Being at the conference made me feel like I belonged to this world. While I was there, I didn’t feel like I was some sort of imposter trying to sneak in and hope no one noticed me.

Throughout the conference, so many of the presenters shared stories of their experiences, and I found that their stories were similar to my own journey. They shared their hard-learned wisdom, their insight. They provided tips about how to avoid some of the same mistakes they made, about how to get through some of the difficulties that are inevitable.

Writing is often a very solitary experience. To paraphrase a quote I’ve seen floating around online – writers are a group who lock themselves away from other people in order to write about human interaction.

This is often true. It is why I am so grateful for experiences like my MFA program, like Boskone. These are times when I am able to form connections with people who understand what I am trying to achieve. We are able to share our worries, share our successes, celebrate the things that are important to us. Ultimately, we are able to recognize that we are not alone in what we are trying to achieve. We are not imposters or failures. There is an entire community of people on a path similar to the one we walk. Most of them are wonderfully kind. Most of them want to see others in the community succeed.

As writers, all of us are on a similar journey, and it is one that admittedly does not ever really end. No one ever really achieves “being a writer.” We will never fully figure it out. Those insecurities and struggles don’t just go away. But rather than be disheartened, this can be good news.

My journey as a writer will not be easy, but neither am I the only one dealing with this. There are stories of success. There are people who are happy to offer guidance and support as I move forward. And I can do the same in turn for others.

In writing – as in life – we’re in this together. And that is a hopeful thought.

2 thoughts on “Writing in Community”

Books discovered in the library
Scenes from a river walk